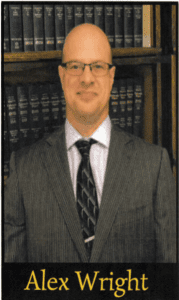 Alex was born and raised in Denver, Colorado and received his undergraduate degree from CU Boulder in 1993. Alex dreamed of practicing law in San Diego, so he attended California Western School of Law in San Diego, where he was named to the Dean’s Honor List and enjoyed internships with the California Superior Court, the San Diego District Attorney’s Office and San Diego City Attorney’s Office, which honored him with a Certificate of Appreciation for “outstanding and exemplary performance.”

Alex passed the California Bar Exam with scores high enough to waive into Colorado but, true to his dreams, began practicing with a small firm in San Diego.  The pull of family still living in Denver caused Alex to move back to his home town, where he practiced for years before deciding that we could make a bigger difference in a small town.  After a great deal of research and soul searching, Alex decided upon Sterling.

Alex has dedicated himself to his clients, of course, but also to serving the community that has been so good to him and his family.  Alex has been a member of the following organizations, with leadership roled indicated in parentheses:

Alex is an ancient history buff and a powerlifter. He is a passionate fan of the CU Buffaloes and Denver Broncos. He enjoys spending time with his three daughters and two dogs.